I have a last-minute trip to New York this week. Because this is the season, apparently, of $750 hotel rooms when you book them late, I decided instead to save some money and make it an up-and-back trip in one day.

Which means I wanted an early train. So I searched for morning trains on the Amtrak site:

…and found that the earliest train possible got me from Baltimore to NYC by 8:44: 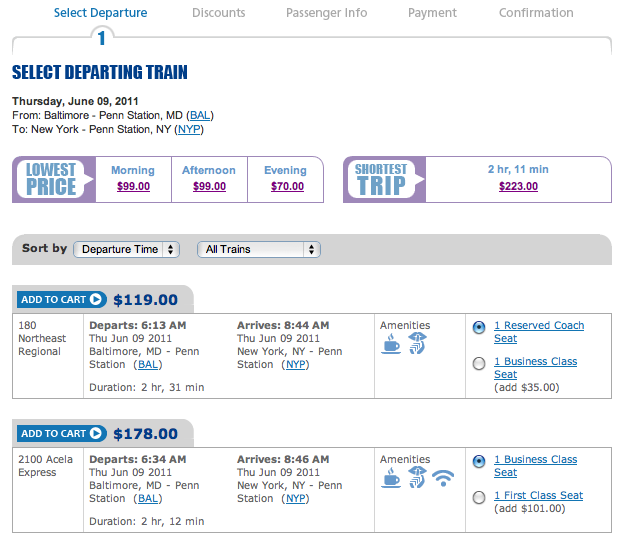 I thought I’d remembered earlier trains, but guessed that they may have been sold out, given that I was traveling at the last minute (UX note: See how quickly I assume I’m doing something wrong, instead of the site). But this morning, as I pondered the mad 20-block dash to get to my meeting a half-hour late, it struck me as impossibly odd. So I searched other dates into the summer, all with the same result of no trains before 6 a.m.

I downloaded the official Amtrak Northeast Corridor timetable (updated March 2011) and it confirmed my suspicions: there were earlier trains. So why weren’t they showing up on the Amtrak site when I was looking, I thought, at all morning trains?

I called to talk to a ticket agent. While I was on hold, I did what all flummoxed web users do: I clicked on random things. Finally, I hit on the secret combination: Instead of selecting “morning,” I should select a particular hour in the morning. 5 a.m., for example. 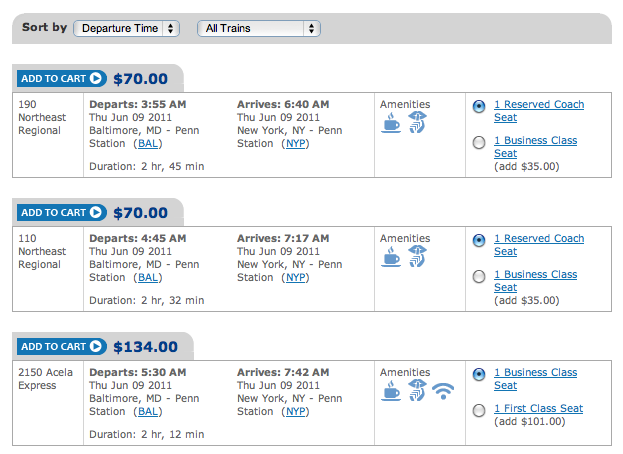 When I finally got the friendly Amtrak web support person on the phone, I asked her why the choice of “morning” did not, in fact, display all of the morning trains. She didn’t know, but her guess (and I think she’s correct) was that the site designer assumed that most people meant 6 a.m. when they said morning. 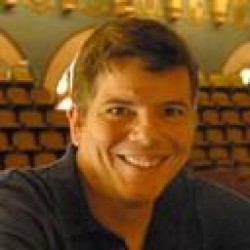 VP, Content & Conversion at LendingPoint LLC
I lead media companies and other organizations that want to develop and improve their mobile and digital strategies and technologies, grow audience, and build sustainable digital revenue.

Those types of UI issues are why IT folks have a bad rap. That is utterly ridiculous that it didn’t show you all the morning trains. It should also tell you the timeframe that morning means. I use Orbitz a fair bit and their “portion of the day” selections alway seem to work as desired, so it can be done right.

even i had issues with Amtrak site…ridiculous..